A key assumption coming out of the 2012 presidential election in the U.S. was that polarization of the party system was, once again, increasing dramatically. The 2012 campaign was immediately dubbed the most polarized and partisan yet – a familiar declaration given that 2008, 2004, and 2000 had also been dubbed the most polarized elections of their respective times. Uniquely, though, instead of justifying this declaration solely on the basis of presidential candidates’ positions the platforms themselves were also held up as key evidence. ((See, e.g., NY Times 29.8.2012, 05.09.2012; Washington Times 27.08.2012; Chicago Tribune 27.08.2012, 05.09.2012.)) The question, then, is the extent to which the polarization of the 2012 election reported by media sources reflected actual levels of polarization. Using newly coded party manifesto data ((You can find a brief introduction to the manifesto project here))  from the 2012 national level elections, we show that (contrary to popular opinion) polarization levels for the 2012 elections were relatively stable. The overall trend in polarization for the U.S. remains unchanging and the party system is not suffering from great increases in overall polarization levels. 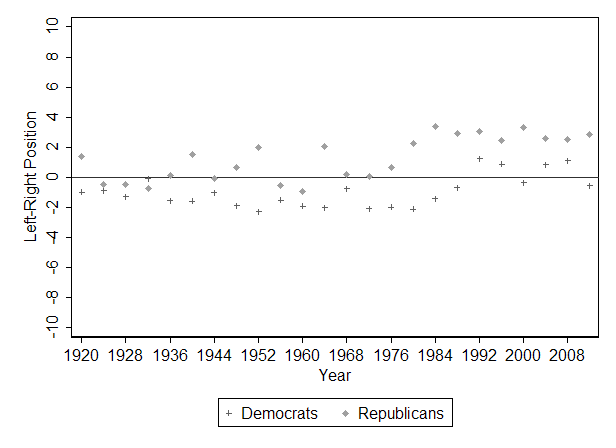 Figure 1 shows several specificities of the US party system. Firstly, both parties have consistently maintained a position in the middle of the scale. The maximum of the Republicans moving to the right was 3.36 points in 1986 and the maximum of the Democrats moving to the left was -2.3 in 1952. Furthermore, the mean Republican position is 1.27 and the mean Democrats position is -0.96. This already gives a slight indication that supply side polarization is generally not as strong as predicted by demand side and elite driven theories. A second finding from Figure 1 is that the Republicans have crossed into the left space a few times before 1960, while the Democrats have only switched into the right space after 1984. The latter move warrants a closer inspection as it influences the discussion of the 2012 election. The first time the Democrats take on a right profile was in 1992, which resulted in the election of Bill Clinton as the 42nd president. Given the nature of the 1992 elections, discussed by realignment/dealignment and partisanship scholars, this is not an unexpected finding.  After Clinton’s terms, the party shifted back slightly to the left in 2000– an unsuccessful move as the Republicans won that election. During the presidency of George W. Bush and in the aftermath of the terrorist attacks of 9/11, the Democrats took on a conservative profile again and only turned back to the left in the most recent election of 2012. Even during the 2008 election, with the historical candidacy of one of the more ideologically leftist junior Senators of the U.S. Congress ((Clinton, J. and S. Jackman. 2009. “To Simulate or NOMINATE?” Legislative Studies Quarterly. Vol. 34 (4): 593-621.)) we see that the Democratic Party retained a rightist stance.

Such results are not surprising given the academic literature on polarization levels in the U.S. party system. It is a well-known assumption of political party research that the electoral rules of the USA lead to a two party system, which, in turn, leads to the ideological convergence of parties toward the middle of the political spectrum (cf. Downs 1957 ((Downs, A. 1957. An Economic Theory of Democracy))). In the US political system, this assumption is played out time and again between two national parties who’s ideological positions  vary little in regards to the policies put forth in party platforms and who are perched squarely on an ideologically centrist position (yet again evidenced in Figure 1). However, such centrism and relatively minor ideological differences between the two national level parties has led commentators to bemoan a lack of policy choices on the part of voters and a quick look at the statements of both parties in their 2008 election platforms provides face validity for this concern. Both party platforms are centrist and the most frequent policy statements are devoted to the ability of the respective party to offer better leadership than the other party (8% of the Republican platform and 9% of the Democratic platform concern this issue). The next most frequent policy statements in both platforms advocate for increased aid to minority populations (Republicans 9%, Democrats 5% of policy statements) followed by appeals for more cooperation between the U.S. and its international allies (11% and 7%).  Apart from some highly politicized policy areas like the welfare state and social morality the two national level platforms are strickingly similar.

The story thus far seems indeed quite dire for the American voter who appears to face a lack of real political choice of representatives—an important component of democracy. However, our research shows that another institutuional design factor of the American poitical system—federlism—at least partially corrects this lack of choice. We coded over 70 state party platforms from 2008 and 2010 using content analysis based on the Manifesto Project approach (www.manifesto-project.wzb.eu). While these platforms are all from Democratic and Republican state parties, we find that state parties in the U.S. enjoy high levels of autonomy from the national parties to form their own ideological profiles.   Additionally, we also show that state parties take full advantage of this autonomy.

Figure 2: Left-right-scores for Democrats and Republicans, state level, 2008 and 2010 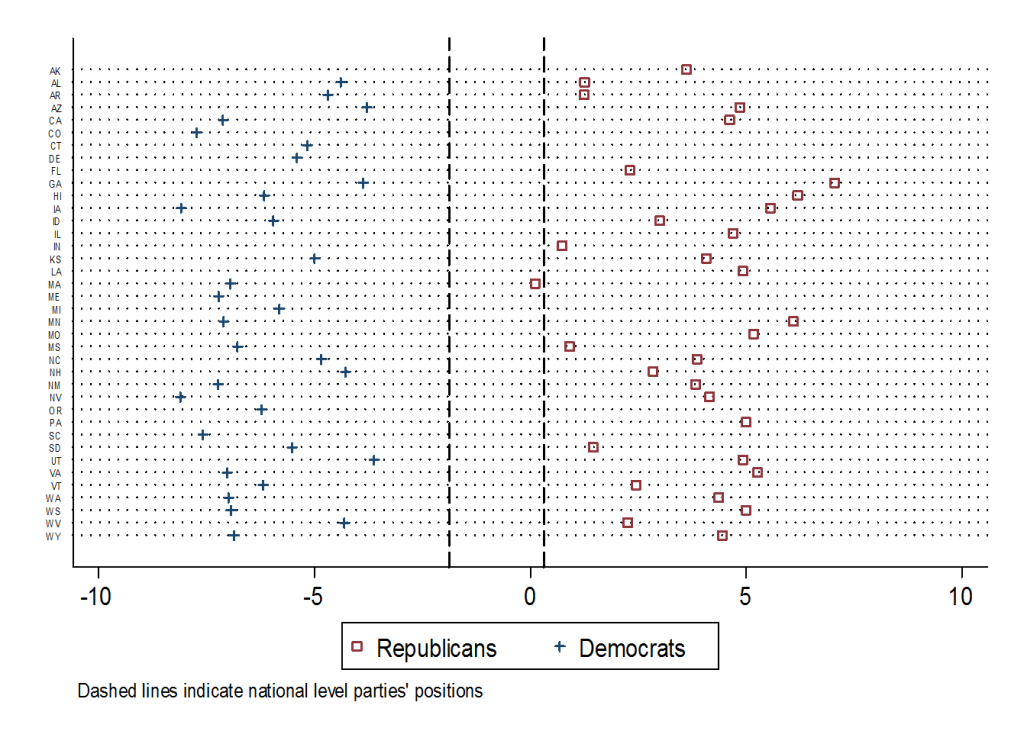 Figure 2 shows the ideological positioning of state parties on a -10 to 10 point Liberal to Conservative scale . As this shows, while the national parties are in fact ideologically centrist, the state parties are far more varient in their ideological positions. This finding is important for two reasons. First, it indicates that there is more choice in the American party system than is often assumed. Secondly, the findings suggest that state parties are representing their constituencies rather than simply following the lead of the national parties which provides some indication that parties in the US are still fulfilling their crucial role as democratic representatives.