Originally published on this blog in German on Septmeber 12th, 2013.

Political repression in the sense of systematic violation of civil and political rights is practically a defining property of autocracies. If autocratic governments want to stay in power they have to be in a position to repress dissidents and to eliminate opposition. Under these circumstances, political repression becomes a key tool. Whether the army of Myanmar savagely crushes the 1988 democracy movement or Alexander Lukashenko imprisons the presidential candidate of the opposition, the intention is the same: via political repression, autocratic regimes seek to prevent the development of forceful political opposition movements. But to what extent do autocracies actually resort to political repression? What developments are to be observed over time? And how does political repression affect the chances of democratization? These and closely related questions are addressed by the project “Critical Junctures and the Survival of Dictatorships. Explaining the Stability of Autocratic Regimes” at the WZB.

In this project a particular focus is on violations of human rights in autocracies, ((We speak of a democracy when multiparty elections for legislative and executive offices take place and the power of the executive is subject to clear limits. Autocracies fail to fulfil at least one of these necessary conditions. We are thus dealing with a slightly modified version of the definition of autocracy given by Cheibub, José Antonio; Gandhi, Jennifer; Vreeland, James (2010): Democracy and Dictatorship Revisited. In: Public Choice 143 (1/2), 67–101.))  a topic that follows in the long tradition of research into physical integrity violations by the state. This research shows that the more repressively an autocracy handles the population, the more frequently its immediate agents – e.g., the police – torture and abduct, commit extra-judicial killings, and take individuals as political prisoners. The results of such action have to be seen from two sides. Extra-judicial killings, the most explicit form of violating the right to integrity of person, eliminate individuals once and for all. In this manner, autocracies get rid of individuals whose behaviour they consider intolerable. In the second place, autocratic governments demonstrate to the remaining population what consequences nonconformity can have, and they prove their capacity to take appropriate steps: They instil fear. This was precisely the intention pursued by Bashar al-Assad when he had demonstrators fired on in March 2011 for the first time. For this particular form of violent physical coercion by the state, Myra Feree has coined the term “hard repression”. ((Ferree, Myra M. (2004): Soft Repression. Ridicule, Stigma, and Silencing in Gender-Based Movements. In: Daniel J. Myers und Daniel M. Cress (eds.): Authority in Contention: Emerald Group Publishing Limited (Research in Social Movements, Conflicts and Change, Volume 25), 85–101.))

There are several sources available for measuring hard repression in an autocracy, of which the Political Terror Scale (PTS) and the CIRI Human Rights Dataset (CIRI) are the most important. Both are based on the judgement of country experts, who report annually in a more or less detailed questionnaire on how governments in various countries respect human rights. The benchmark is human rights as defined in the Universal Declaration of Human Rights. On the basis of PTS and CIRI data, we developed an index for the 147 autocracies we have listed in our sample, summarizing information on torture, abduction, extra-judicial killings, and political prisoners in a single statistic. Theoretically, the index ranges from 0 to 100 with higher values indicating more hard repression. For the period from 1981 to 2008 this index measures the extent to which autocratic governments or their immediate agents factually violated the sanctity of the individual and consequently exercised hard repression. ((In essence it is an unweighted average of the two sources, rendered comparable by means of min-max scaling. Compared with individual measurements, this index reduces the influence of measurement errors and gives a more precise picture of the empirical facts. The range of the index is from 0 to 100, with higher scores indicating a higher level of hard repression. It should be noted that min-max scaling is oriented on the empirical minimum or maximum of an indicator. A score of 0 therefore does not mean that no violations of human rights occur, but merely corresponds to the lowest measurement ever recorded. In our choice of scaling method we have followed the arguments of our colleagues from the Democracy Barometer.))

Figure 1: The development of hard repression in four autocracies

Figure 1 gives some examples. It shows the results for four autocracies between 1981 and 2008: Egypt and Syria, where recent developments have attracted a great deal of attention in the media; Zimbabwe, whose autocratic one-party regime has survived the worst of crises; and China, with which Germany has for years engaged in an incessant dialogue on the rule of law. The solid line indicates the development of the index, the broken line gives the mean for each country, and the points show the individual scores. The average for Egypt under Hosni Mubarak was about 55, but in the mid-1980s scores were much lower. Since then the level of hard repression in Egypt has risen. Particularly the terrorist attacks on 1992/1993, the onset of the “War on Terror” in 2001/2002, and the 2005 elections resulted in peak scores of over 60. At a higher average level, China showed a similar upward trend. The country mean is already 68, and the events of Tian’anmen Square on June 4, 1989 brought the level up to 100. The situation was quite different in Syria, now in the throes of civil war. Although the Syrian mean score of 66 is already in the top third of the index, the situation eased after the Hama massacres in 1981 and 1982 (each 100). From 2000 onwards, violations of human rights by the Syrian government increased again, and reached a score of 81 by 2008. Zimbabwe, ruled by Robert Mugabe first as prime minister and since 1987 as president, shows a quite different profile. While the score for 1981 (19) was well below the mean of 55, it rose rapidly in the years that followed, reaching a score of no less than 94 in 1985. Thereafter, the level of hard repression once again declined. However, with the onset of the economic crisis in the late 1990s, the violence-stricken elections of 2000 and 2002, and the systematic persecution of the political opposition in rural areas from 2005 onwards the index progressively increased. Following the controversial presidential election of 2008, Zimbabwe finally reached the level of 100 points. In sum, the graph leaves no doubt that autocratic regimes can drastically differ in their use of hard repression, and they may exhibit clear trends. 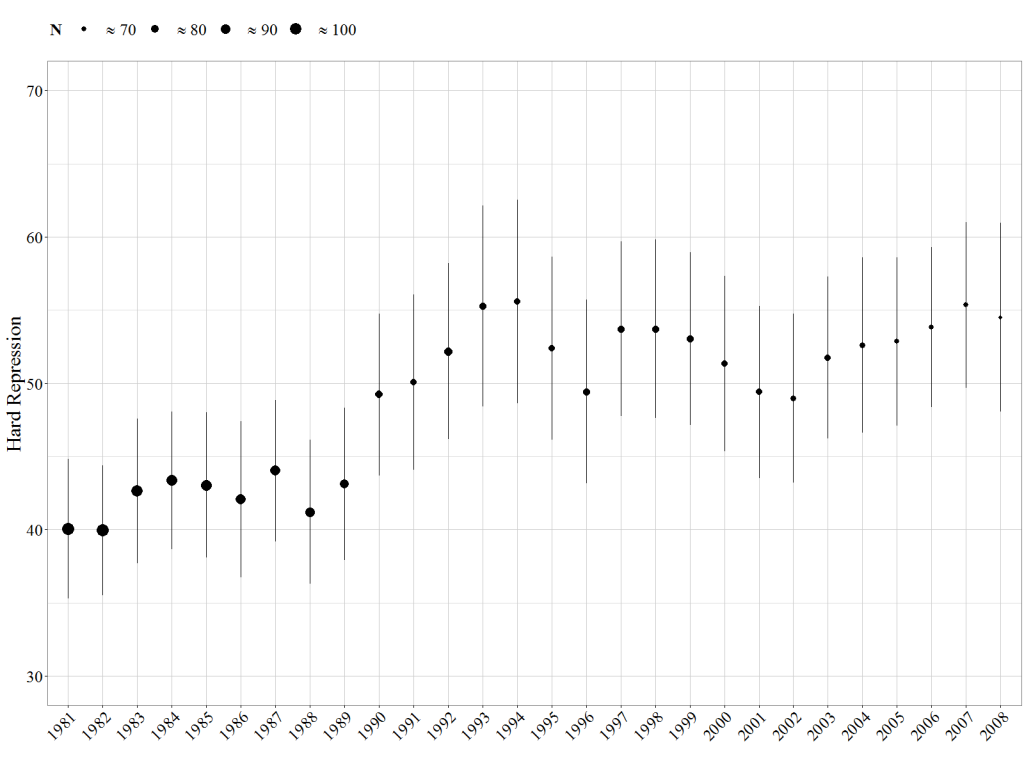 What developments are then to be observed in the use of hard repression across all autocracies between 1981 and 2008? Figure 2 shows the annual mean of the index on hard repression across all autocracies in the given year of the observation period. The points in the scatter diagram vary in size depending on the number of autocracies recorded in a given year. Confidence intervals at the 95 per cent confidence level are shown as well, giving us an idea of the precision of the estimate. Put simply, greater intervals indicate less precision. The chart reveals a wave-like upward trend in the use of hard repression under autocratic regimes. While the value for 1981 is 40, the figure jumps to about 50 in 1990, and peaks in 1994 at around 56. Following a slight downturn in the early 2000s, it again rises to 55 in 2007. In a parallel development, the number of autocracies recorded markedly diminishes. Starting with some 100 non-democratic governments in 1981, there were only about 80 by 1990, and just under 70 in 2008. All other autocratic regimes had managed the transition to democracy. Figure 2 thus shows that the average level of hard repression in autocracies is increasing over time, while the actual number of such polities is steadily declining.

This observation agrees with a number of other research findings, and demands further discussion. Here are two attempted explanations. On the one hand we could be dealing with a genuine trend in the autocratic camp towards more and more ruthless measures to protect the government hold on power. On the other hand it might be the case that autocratic regimes that are reluctant to use hard repression are particularly likely to lose out to democracy. As a result, a hard core of autocracies might have formed over time, which is sufficiently unscrupulous to base their rule permanently on torture, murder, and abduction. We will explore both possibilities in a later post.