Originally published on this blog in German on October 2nd, 2013.

After more or less stagnating for 15 years, the proportion of women in the German Bundestag has for the first time reached the mark of 36.9%. That is an increase of a good 5%. The CDU and CSU parliamentary groups now have more woman members than ever before and women are markedly overrepresented in the Green and Left Party groups. This is quite unexpected. As we had shown in an earlier contribution, the parties had broken no new ground in nominating candidates for this last election to the Bundestag.
The key factor determining female representation, apart from the general fact that some parties appear not to be particularly attractive for women owing simply to their membership profile, are the internal party rules on equal opportunity. Figure 1 shows the development of women’s membership of the Bundestag over time. ((Figures based on Davidson-Schmich, Louise K. and Isabelle Kürschner (2011): „Stößt die Frauenquote an ihre Grenzen? Eine Untersuchung der Bundestagswahl 2009“, in: Zeitschrift für Parlamentsfragen, 42.1, 25-34.))

Figure 1: Proportion of Women in the Bundestag 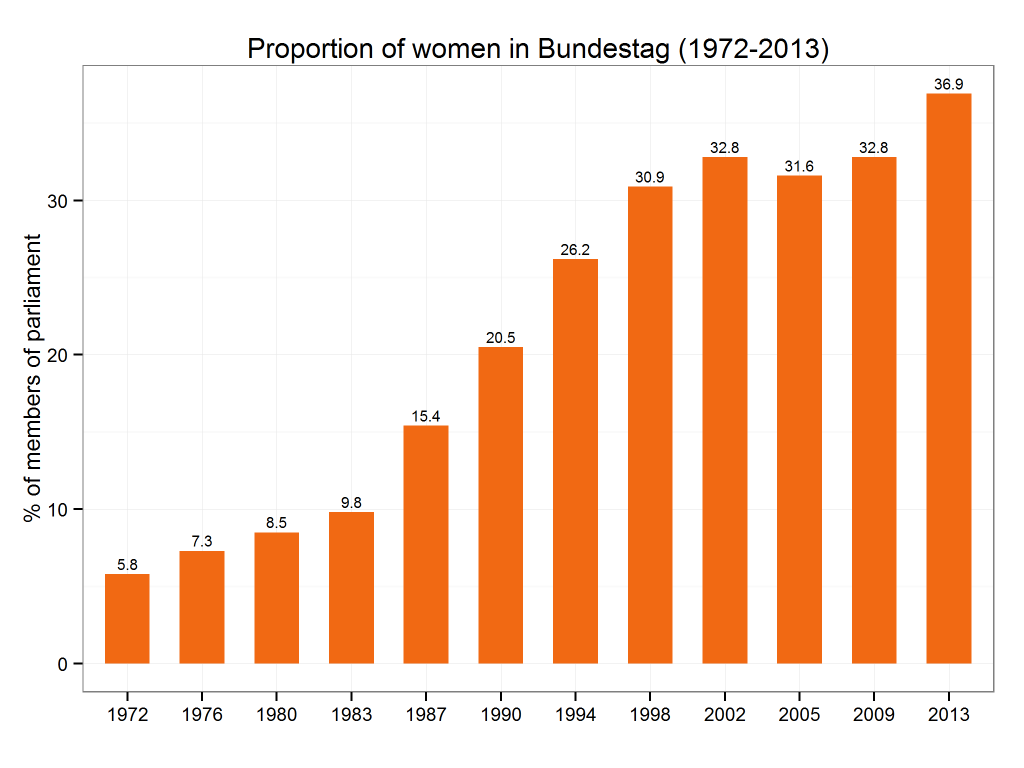 The proportion rose with the arrival of the Green Party (1983), with the introduction of a quota for women in the SPD (1988) and the women’s quorum in the CDU (1996). Then however, the level of female membership stagnated at 30%. It was only when the FDP (the only liberal party in Germany, if we are to believe certain recent assertions) was ousted from the Bundestag that the way was open for a higher ratio of women members.
How high are the quotas for women of the individual parties in the Bundestag? Two groups can be distinguished (Figure 2). The centre-right camp (CDU, CSU) had already nominated a lower proportion of women candidates than had left-of-centre parties. Moreover, the CDU had not managed to convert a 32.3% ratio of women candidates into an equal proportion of seats held by women. The rate fell to the level of the CSU (24.7%). Although the CDU had met its own female candidate quorum, it had placed the women high on party lists and in constituencies with no prospects of winning, so that even with such a favourable election result, these candidates had no chance of gaining seats. The CSU has been able to maintain its level, with a quarter of seats going to women, but the glossy picture they had painted with nominations to the party lists, as expected, proved an eyewash.

Figure 2: Women’s Quotas of Parties Represented in the Bundestag 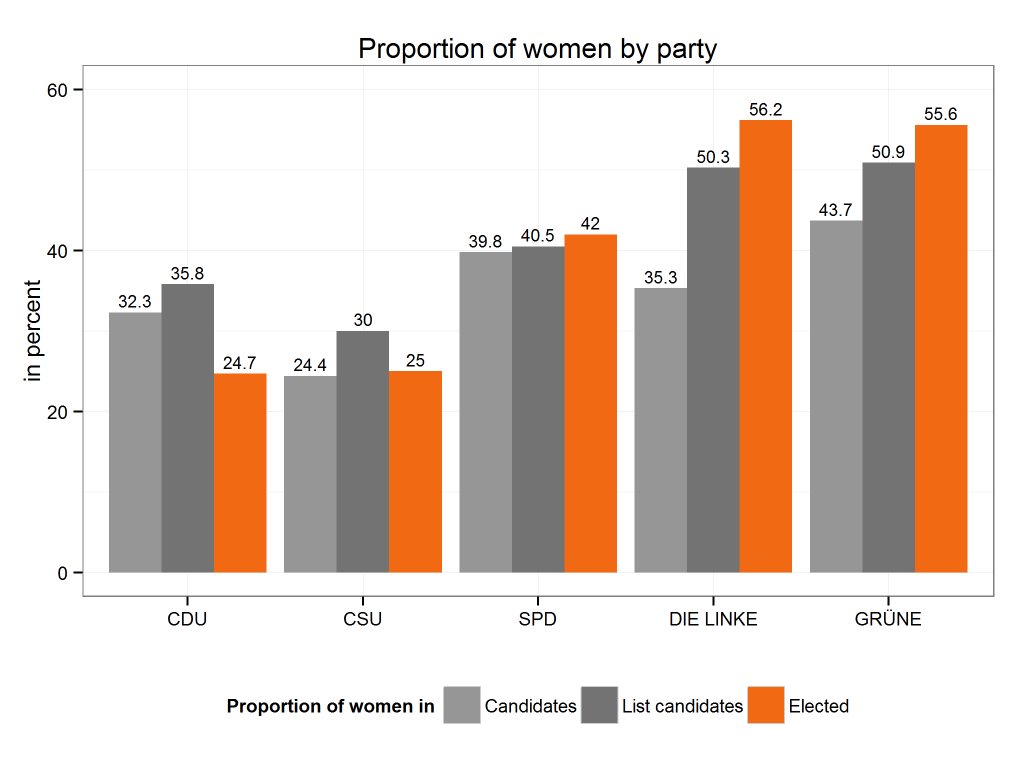 The left camp, by contrast, managed even to surpass its original target for women candidates, both overall and on party lists. In the Green and Left Parties, which together won only 5 direct seats, this was due to consistent gender parity in party lists. In fact, however, they overshot the mark, with a proportion of women far beyond that in the general population (Greens 55.6%; Left Party 56.2%).
The results for the SPD show that women’s quotas for party lists also influenced nominations for constituency seats. SPD women stood for election not only in constituencies they had no hope of carrying. But, as Figure 3 shows, the Social Democrats did not go the whole way. Whereas SPD women ran in a third of constituencies, they carried only a quarter. The CDU experienced a similar drop, although compared with 2009 they succeeded in increasing the number of constituency seats won. 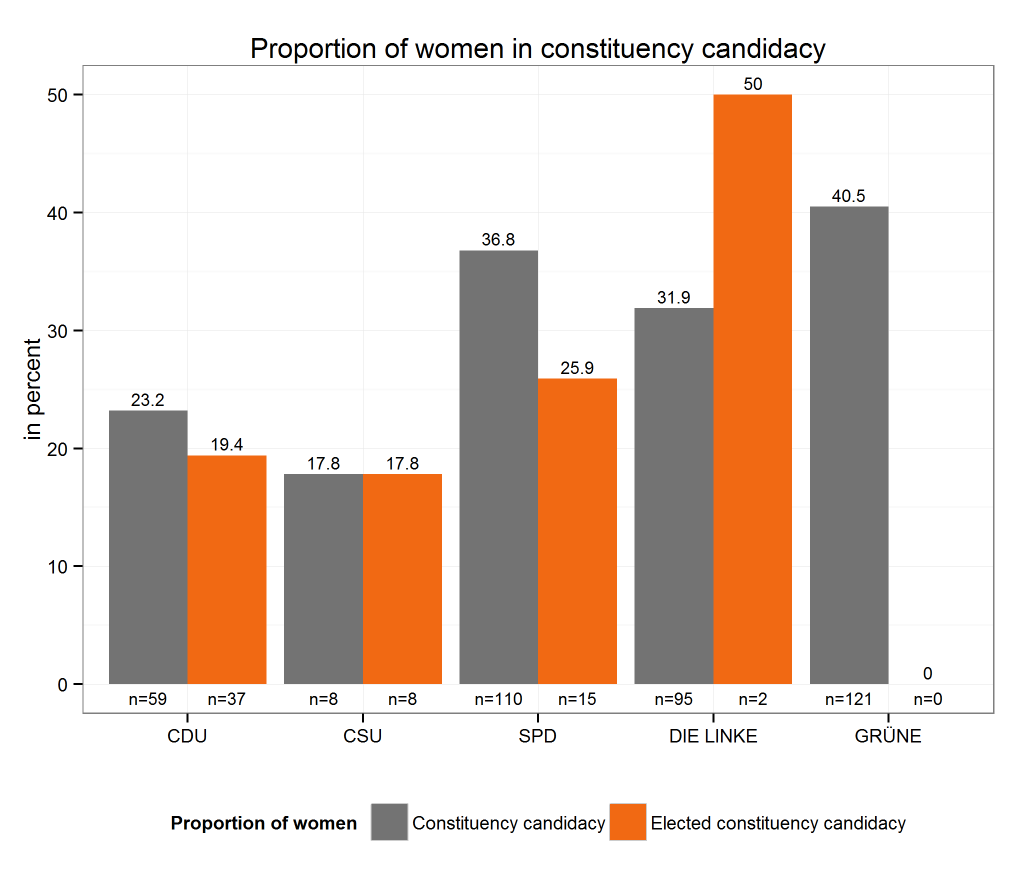 As we see, the centre-right camp is to blame if there is not an even higher proportion of women in the Bundestag. Whereas the Green and Left Parties exceeded their targets, the CDU and, above all, the CSU will have to make more of an effort if they want to attain the goal laid down in their statutes of equality between men and women.