Originally published on this blog in German on Septmeber 19th, 2013.

Do women make politics differently from men? The answer lies somewhere between gender stereotypes and contradictory empirical findings. Do women automatically do better work in parliamentary assemblies than men simply because they are women? This seems rather unlikely. Is a low proportion of women in parliament a problem for democracy? This is surely the case, for it points to structural discrimination that cannot be eclipsed simply by having a woman head the federal government. After the Bundestag election in 2009, the proportion of women in the house was only 32.8%, a figure that had more or less stagnated since the 1998 election. The debate about quotas in top management in business could easily be transferred to the Bundestag and political parties.
Of course one can argue that election results – and thus naturally membership of the Bundestag – should reflect the interests of the the citizenry, men and women alike. Unlike in the question of whether my vote goes to the SPD or the CDU (or is lent out to the FDP 😉 ), I have no direct influence on what person I elect to the Bundestag. This is due firstly to the persistence of strong party loyalty. ((Wagner, Aiko und Bernhard Weßels (2011): „Kanzlerkandidaten – Wie beeinflussen sie die Wahlentscheidung“, in Politischer Vierteljahresschrift, Sonderheft 45/2011, 345 – 370.)) Secondly, the electoral system gives the voter a choice between persons: in each constituency only one candidate per party stands and the order of candidates on party lists is fixed from the outset, and cannot, as in some countries with a preference vote (e.g. Netherlands), be influenced on election day by the way people mark their ballot paper. In other words, it is the parties that decide on gender distribution in the Bundestag because they alone decide who is nominated to stand for a constituency seat and who is placed on the party lists. What is to be said on this subject in the run-up to the Bundestag election on 22 September? 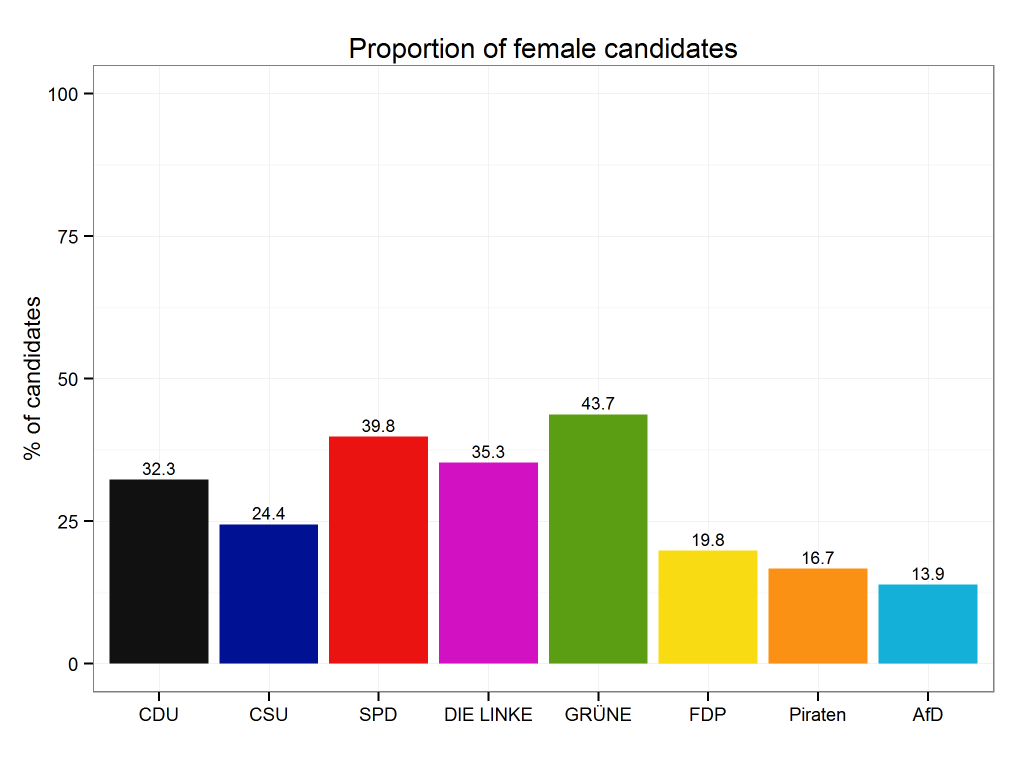 Figure 1 shows the proportion of women among candidates nominated by parties represented in the Bundestag, as well as the AfD (Alternative for Germany) and the Pirate Party for the 2013 election to the Bundestag. No party manages to field a percentage of female candidates corresponding to the actual proportion of women in the population. The Green Party still has the highest percentage of female candidates (43.7%) followed by the SPD (39.8%) and the Left Party (35.2%). Of the established parties, the FDP trails the field with only 19.8% of its candidates being women. In the two new parties, too, men predominate. Only 16.7% of Pirate candidates and a mere 13.8% of AfD candidates are women.
We know from the Nordic countries that introducing a women’s quota in one party puts pressure on others to do likewise. Usually, a small party on the left fringe of the political spectrum introduces rules for internal gender equality. The party politically closest to the first follows suit, and the process continues until it reaches the conservatives. This is explained not least by the good external publicity that quota arrangements bring. The parties accordingly send a message to the voters that they actively support equal opportunities.
When only three parties are present in the Bundestag, the proportion of female members stagnates at between 5.8% and 9.2%, and similarly low proportions of women candidates are recorded. When the Greens entered the German Bundestag in 1983, things started to move in the debate on the issue and in the number of women members, which rose steadily for 20 years. In 1988 the SPD introduced a quota, and 8 years later the CDU followed suit with a “women’s quorum.” ((Davidson-Schmich, Louise K. and Isabelle Kürschner (2011): „Stößt die Frauenquote an ihre Grenzen? Eine Untersuchung der Bundestagswahl 2009“, in: Zeitschrift für Parlamentsfragen, 42.1, 25-34.))
As Figure 1 shows, there is a clear connection between internal women’s quotas in parties and a balanced representation of men and women. The parties that have imposed more formalized, more far-reaching, and higher quotas for women (Greens, Social Democrats) also have the highest proportion of women candidates. Parties with weaker quotas or quorums that are more in the nature of recommendations (CDU, CSU) have far fewer women candidates. The lowest proportions were to be found in parties that had no internal quotas (FDP, AfD, Pirates).
It should be noted that internal quotas in the Green and Left Parties do not apply to all types of candidacy. Only list candidacies are assigned alternately to ensure a minimum of parity between men and women. Figure 2 shows the proportion of women in terms of candidate type for each party. We see that in nominations for party lists, both the Left and the Green Party meet their own quotas of 50%. Since the two gain seats in the Bundestag almost exclusively via state party lists, equal gender representation there can be expected. The catch-all parties CDU and SPD with scores of 35.85% and 40.5% also meet their internal quotas (CDU: 33%, SPD: 40%). The CSU, too, with a 30% share of list candidacies for women still occupy the middle ground. But since this party wins its seats via constituencies, the proportion of women constituency candidates is important. With only 17.8% of female first-vote candidates, the CSU is thus at a level almost as low as the FDP (17.1%). The FDP continues to do without an internal quota, even though women in the party have long advocated a 40% internal quota. 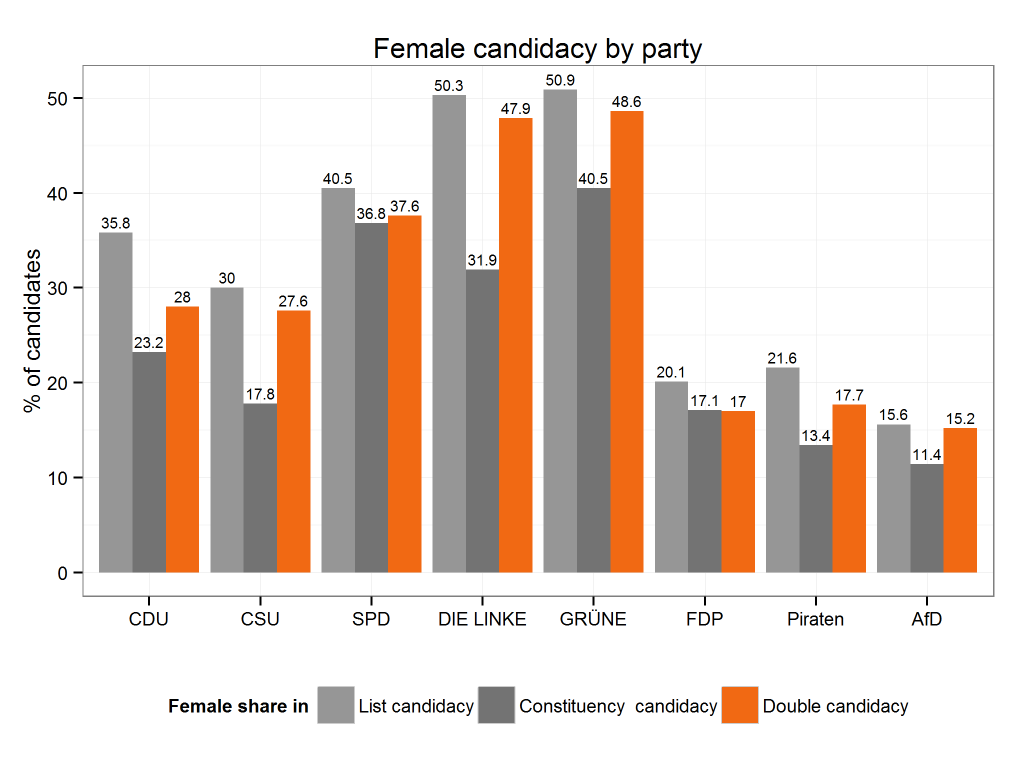 And, in fact, no party with seats in the Bundestag has formal arrangements to ensure an equal number of female and male constituency candidates. In practice, constituency candidates both female and male often emerge from small, informal party groupings in which women tend to be underrepresented. Candidates are then only selectively put forward for official nomination. It is therefore not surprising that all parties have a lower proportion of women constituency candidates than list candidates. This will not be a problem for parties that win seats largely via party. But for catch-all parties that mainly win seats directly in the constituencies, this means that, although they can pride themselves on meeting their quotas, they do not in fact translate them into ratios of Bundestag seats.
Figure 2 also shows the proportion of women who stand for election both in a constituency and on a state list. For the candidates of smaller parties, these double candidacies are important because their chances of winning a direct seat are slim. For almost all parties, with the exception of the CDU, the proportion of women with double candidacies approaches the level of women on party lists. It seems that the parties are at least making an effort to make sure their women constituency candidates are elected by also putting them on party lists.
Overall, parties with an internal women’s quota also meet it. Fixed rules for these quotas increase the probability of them also being reached. Internal women’s quotas have also led to more women entering the Bundestag. The figures are not really surprising. As we have seen, an equal distribution of candidacies between women and men – whether in constituencies or on party lists – was far from being achieved for earlier elections, either. Publications by both the Federal Returning Officer and the European Academy for Women in Politics and Business ((here the pdf)) on the current Bundestag election show this unequal distribution. Some of the parties, as a study by Sara Schlote ((here the pdf)) on the proportion of women in local Baden-Württemberg assemblies shows, have recognized the situation and are looking for ways to improve things. Whether the necessary changes come about remains to be seen. At the present time, it is difficult to distinguish between lip service and serious intention. It is obvious that parties are under varying pressure to act. While the Green Party has already done its homework as laid down in the statutes and have established higher participation for women via other structures and measures, the situation in other parties is to some extent markedly worse. The deregulated candidacy market of the FDP, in particular, would benefit from at least temporary regulatory intervention. The two new parties, the Pirates and the Alternative for Germany, have notably also failed to bring any improvement. The stereotypes associated with them of bespectacled computer nerd and right-wing conservative pensioner may be no more than clichés. However, there is no denying a clear excess of men among their candidates.
We repeat: a higher proportion of women is no guarantee for different, let alone better politics. Rethinking their internal policy would, however, be better for the parties in Germany both within and externally. Internally, parties could provide a model and thus set an example for business and for society as a whole. Externally, criticism about women’s rights and discrimination in other countries would be more credible if, in the question of the proportion of women in parliament – according to figures published by the Inter-Parliamentary Union – Germany did not rank behind Nepal and Serbia in place 25. But without changes in nomination policy, this will remain a Utopia.

Ein Gedanke zu „The Free Market is Male: Proportion of Female Candidates for the Bundestag Election 2013“