Originally published on this blog in German on August 29th, 2013.

Especially when elections are in the offing, the personalization of politics is a highly popular thesis. It is claimed:

These assertions are countered by scholars who repeatedly point out that people place more weight on the evaluation of parties in deciding how to vote than on how they assess the candidates for the chancellorship. Not that anyone would deny that the electorate’s opinion of candidates plays a role (see e.g. here). But the question is how strongly it really influences the way people vote.

Simulations can help us find out. (A longer German version of this contribution is to be found in ARGUMENTE 2/13, ->pdf) We used data from the 2009 German Longitudinal Election Study (GLES, post-election cross section). The first step was to develop a model to explain the reported vote of respondents in terms of party preference, perceived ideological distance between voter and party, and generalized party and candidate evaluations. This gives us the “most probable electoral choice” of all respondents. This model of voting behaviour allows us to establish a theoretical election result.

Figure 1: Share of the vote for parties represented in the Bundestag – model prediction and actual result ((http://www.bundeswahlleiter.de/de/bundestagswahlen/BTW_BUND_09/ergebnisse/bundesergebnisse/)) 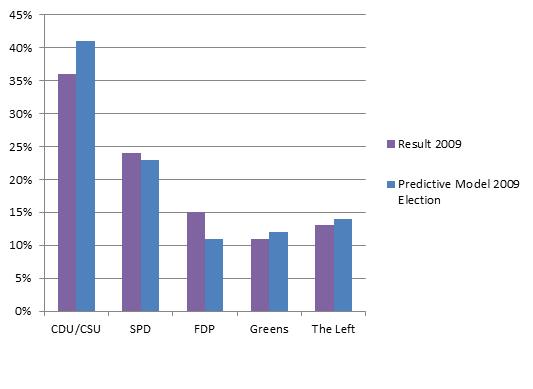 Note: 24% of all votes cast for Bundestag parties actually went in 2009 to the SPD while the model forecasted 23%.

Comparison of the actual results for the 2009 Bundestag election (first column, purple) with the theoretical prediction of our model (second column, blue) shows relatively low deviations of under 1.5% for SPD, the Greens, and the Left Party. The share of the second vote (list vote) taken by the Union is, however, overestimated, that for the FDP underestimated, which points to strategic voting on the part of voters who, according to our model, should really have opted for the Union parties but finally voted for their preferred coalition partner. They voted strategically: in other words, they strengthened their preferred coalition partners rather than vote for their preferred party (see Weßels und Wagner 2011 ((Weßels, Bernhard/Wagner, Aiko (2011): “Regionale Differenzierung des Wahlverhaltens”. In: Hans Rattinger/Sigrid Roßteutscher/Rüdiger Schmitt-Beck/Bernhard Weßels (eds.): Zwischen Langeweile und Extremen. Die Bundestagswahl 2009. Wahlen in Deutschland, Bd. 1. Baden-Baden: Nomos Verlagsgesellschaft, 119-129.))). Although the way people vote is influenced by many other factors, we can use the quite presentable predictions of our model for a small simulation.

We investigated how the election in 2009 would have turned out if SPD challenger Frank-Walter Steinmeier had been as popular as Chancellor Angela Merkel, and vice versa, if Merkel had had the popularity level of the then SPD leader. In 2009, as we know, Merkel scored very well in both absolute terms and compared with her challenger (a score of 7.1 for Merkel against 6.3 for Steinmeier on a scale from 1 to 11). If we then reverse these figures and assume that Merkel’s score went to Steinmeier and vice versa, we have the election results shown in the red columns (however, the limitations of this simulation need to be noted: we do not investigate the effects of candidate evaluation on other factors, for instance on the fit between candidate and party or on mobilization).

Figure 2: Modelled shares of the vote for parties represented in the Bundestag 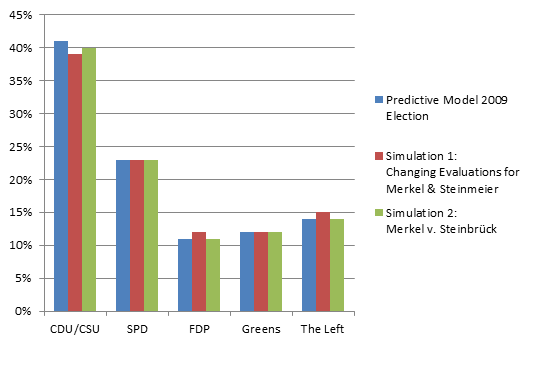 As was now to be expected because of the lower average evaluation of their candidate, the Union parties would have probably have received 2% less of second votes that in the model prediction for the 2009 election to the Bundestag. However, the SPD would hardly have benefited from this or from their now more popular candidate: deviations were fractional.

What do these findings mean for the coming Bundestag election? According to the ARD Germany Trend for August 2013, 67% of Germans were very satisfied or satisfied with the chancellor’s political performance, 32% less or not at all satisfied. For challenger Peer Steinbrück the figures are 35% and 60%. ((http://www.infratest-dimap.de/umfragen-analysen/bundesweit/ard-deutschlandtrend/2013/august/)) These balances (+35 for Merkel and -25 for Steinbrück) were in turn used as parameters in a second simulation (see last columns, green). It should not be forgotten that 2013 is not 2009 and that more has changed than how the candidates of the two big parties are evaluated. This simulation is therefore not to be seen as a forecast of the election result. It tells us how the relation of forces would have been in 2009 if the SPD candidate had been as popular as Steinbrück is at present and if Merkel had been assessed as she is today. What does it show us? Again, the difference is only marginal. Compared with the prediction of the original model, the Union loses 1%, the SPD continues at 23% of the vote and little or nothing changes for the other parties, either. The outcome of the 2009 Bundestag election would accordingly have been similar with the present candidates for the chancellorship. Although a few percentage points can make a decisive difference on election day, on 22 September 2013 it is unlikely that the outcome will be determined only be the politicians involved.