The European financial crisis has divided European nations. The division runs between north and south and some have even described the division as one between saints and sinners. In this contribution Josef Hien sheds light on the cultural underpinnings of this division and argues that religious foundations are at the heart of this divide. He concludes that a “interdenominational” compromise is necessary in order to overcome the polarized status quo.

The European sovereign debt crisis has opened a rift between European nations. Media, politicians and scholars see the reasons for this split in the differences between debtors and creditors, exporters and importers, soft currency and hard currency regimes, prudent reformers and self-indulgent over-spenders. The split has also a geographical dimension: it runs between north and south and some have even described the division as one between saints and sinners.

The biblical image of saints and sinners turns the geographical rift into a cultural one: taking a confessional map of Europe, saints and sinners, creditors and debtors, prudent reformers and self-indulgent over-spenders divide up neatly into Protestant and Catholic/Orthodox nations. All of the five PIIGS, the acronym launched by British journalists to nail Portugal, Italy, Ireland, Greece and Spain during the crisis, are countries with either Catholic or Orthodox heritage. All of the alleged saints have strong Protestant or reformed Protestant denominations. Echoing Weber, can we say that the frugal, hard working ascetic Protestants are standing in for the slacking lifestyle, clientelistic distributional policies and traditional jog trot of southern European citizens?

“A religious interpretation can help us to understand better the tensions between north and south during the crisis.”

Such a religious reading of the European crisis is tempting but way too simplistic. Rampant secularization trends make Europe today the most secular continent on earth and countries like Catholic Austria challenge a straightforward connection between denomination and crisis status.

However, the religious argument cannot be discharged completely: if we look at ordoliberalism, the economic doctrine accused of being the prime instruction sheet behind the austerity approach to the European sovereign debt crisis, a religious interpretation can help us to understand better the tensions between north and south during the crisis. Ordoliberalism, carries secularized reformed Protestant ethics that resonate better in the Protestant parts of Europe than in the Catholic and Orthodox parts. Understanding the religious roots of contemporary socioeconomic doctrine in Europe will help us to find a compromise and a common reply to the sovereign debt crisis.

Ordoliberalism emerged during the 1930s as a conservative response to the Great Depression and the political and economic turmoil in the Weimar republic. Ordoliberals thought that Weimar went wrong because the liberal market economy and its political system had been hijacked by organized interests of capital and labour. They concluded that a free market economy could only work if it was made impermeable to social and political influence. “The economic system has to be like an un-destroyable toy”, “fool proof” as Wilhelm Röpke, a founding father of Ordoliberalism put it in 1948. A strong state should protect this economic system. This state should be de-politicized, guided by highly educated civil servants and arbitrated not by politicians but by courts and guided through rigid regulation.

Of the many scholars that see ordoliberalism at work in today’s Europe most share the view that the independence of the European Central Bank, the deficit criteria in the Stability and Growth Pact and the absence of economic government, all match with the ordoliberal calls for an economic constitution. Some even speak of an “ordoliberal monetary zone” and are convinced that “European money, as conceived in the treaties that created it, is Austrian, ordoliberal and neoliberal money”. This is the fundament of the ordoliberalization of Europe thesis. Ordoliberalism has also been the most important instruction sheet for the austerity politics in Europe during the crisis.

The early ordoliberal thinkers had strong ties to Protestantism. For Müller-Armack his “[p]rotestant confession was not without impact on his scientific work”. Röpke was a descendent of “Protestant-rural notability”. Eucken claimed that “I could neither live nor work if I did not believe that God existed”. Eucken, Lampe and Böhm, developed their new socio-economic concepts within a dense network of Protestant socio-economic thinkers and theologians during the 1930s.

This was not without impact on their economic reasoning. The reformed Protestant conviction that prudence, asceticism and hard work is associated with salvation while poverty is a sign of damnation differs sharply from the Catholic and Orthodox view of alms giving to the needy as an important part in the reciprocal relationship between rich and poor that ensures salvation for both. As the religious sociologist Sigrun Kahl puts it,

“Both predestination and its marks – the ethics of worldly life – have in common the fact that the poor are sinners and the rich are not. Predestination implied that the community has no positive responsibility for the poor, Calvinist moralism implicated that the poor needed to be punished and corrected. Beggars were to be whipped and forced to work” (Kahl 2005, 107).

Help could only be real help if it did induce self-help. Too much help would be un-solidary as it would only temporarily alleviate people out of misery and not enable them to climb out of misery forever by themselves. 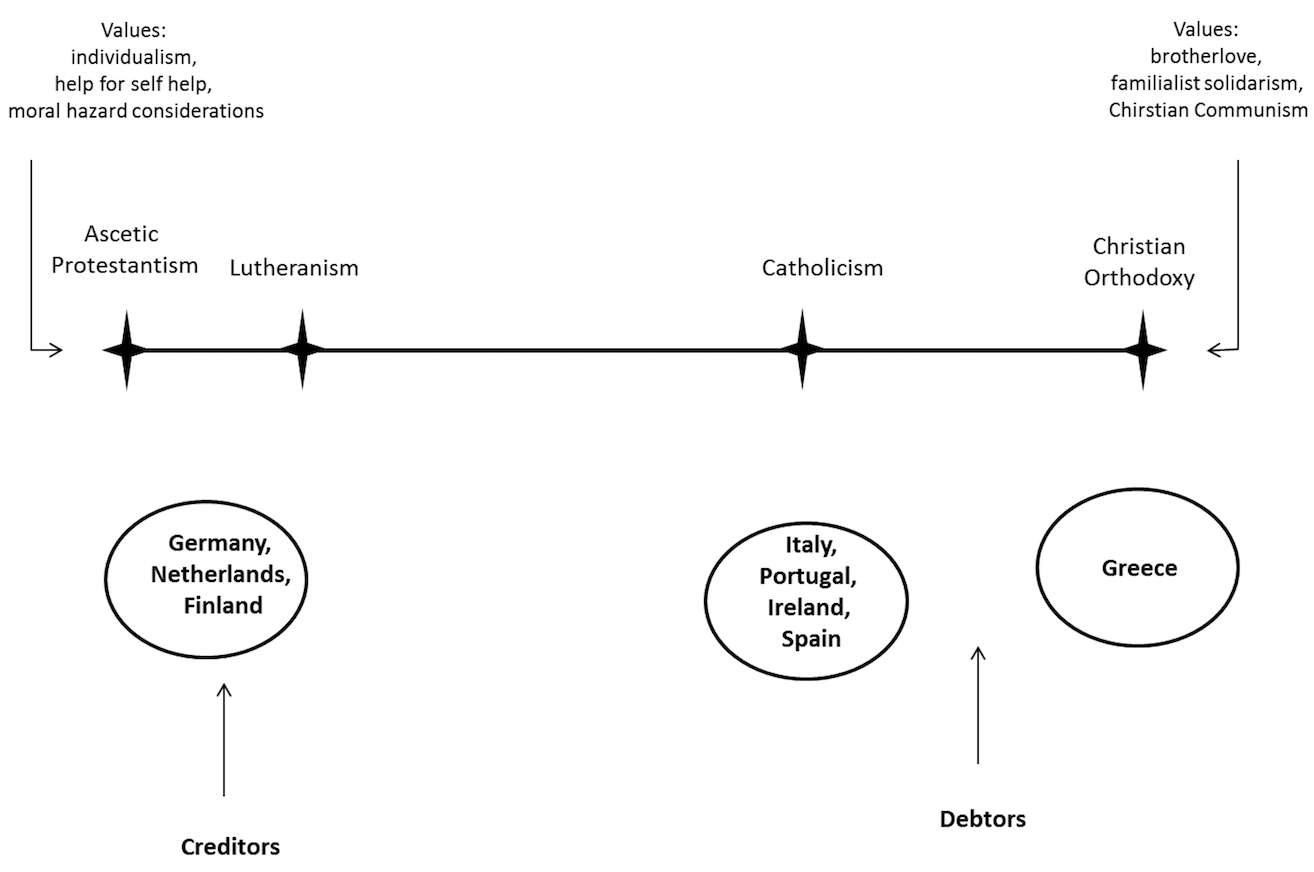 The continuum of Christian Ethics during the European Debt crisis:

Contemporary ordoliberals like German finance minister Wolfgang Schäuble and Central Bank president Jens Weidmann use similar arguments during the sovereign debt crisis. To the Spiegel Schäuble said “[m]y grandmother, who comes from the Swabian mountains, used to say: benevolence comes close to dissoluteness. There exists a type of catholicity, which very quickly has the opposite effects of what had been intended” Weidmann, the head of the Bundesbank and a devoted ordoliberal, said in a recent speech that he admired Prussia’s refomed Protestant reformers. Their reforms started with an amnesty for prisoners but this amnesty excluded “blasphemers, murderers, persons guilt of high treason and – debtors”. Ordoliberal and reformed Protestants seem to have the same idea about debt and poverty. Schäuble emphasized repeatedly that “Greece has lived for a long time beyond its means”, and accordingly, help has to be limited and coupled with rigid conditionality. During the negotiations of the third Greek bailout Schäuble claimed that “[h]elp needs to foster self-help”, “solidarity has to be coupled with solidity”, and “[h]elp to self-help is the principle”.

Historically, Catholic/Orthodox and Protestant social thought have found practical compromises. These positions do not only echo Luther’s “[n]o one should live idle on the work of others”; but the more individualistic lay responsibility principles of reformed Protestantism where “God helps who helps himself”.

The need for a new cultural compromise in Europe

The cultural aspect of the European crisis has received rather little attention in the scholarly debate, which concentrates heavily on economic interest and economic functionality. Scholars are quick in dismissing a divided Europe on a religious base as a misinterpretation of the Weber thesis or n overdrawn “clash of cultures” argument. What happened instead is that an ideological element belonging to a specific elite group in Germany, ordoliberalism, has become hegemonic in Europe. This ideological element has some reformed Protestant properties which makes it resonate better in the cultural sphere of the north, than in the south which are influenced by Catholic and Orthodox Christian thought and their solidarity concepts. That is why the recent crisis seems to be a cultural clash.

However, historically, Catholic/Orthodox and Protestant social thought have found practical compromises. After WWII Model Deutschland emerged as an “interdenominational” compromise. A highly successful socioeconomic construct that allowed for a high amount of social protection and market competition. What Europe needs is a similar compromise between the diverging socio-economic ethics of its northern and southern elites. A consociational socioeconomic system that integrates both the northern and the southern socio-economic reasoning.

Josef Hien is a postdoctoral fellow in the REScEU project at the
University of Milan. Josef got his PhD from the European University
Institute in Florence in 2012 and has worked at the Max Planck Institute in Cologne, the Collegio Carlo Alberto in Turin. He is currently a visiting researcher at the Research Unit Democracy and Democratization of the WZB Berlin Social Science Center.

This Post first appeared in an earlier version on the EU Visions Blog where Josef is a regular contributor. Find his other contributions here. Josef also just recently published his argument in an academic article at the acclaimed Journal for Common Market Studies.