The upcoming Czech parliamentary elections have seen a discursive shift from a left/right toward a populism/anti-populism conflict and a government without a populist party is unlikely, argues Seongcheol Kim in his latest Blogpost for the WZB Democracy Blog. 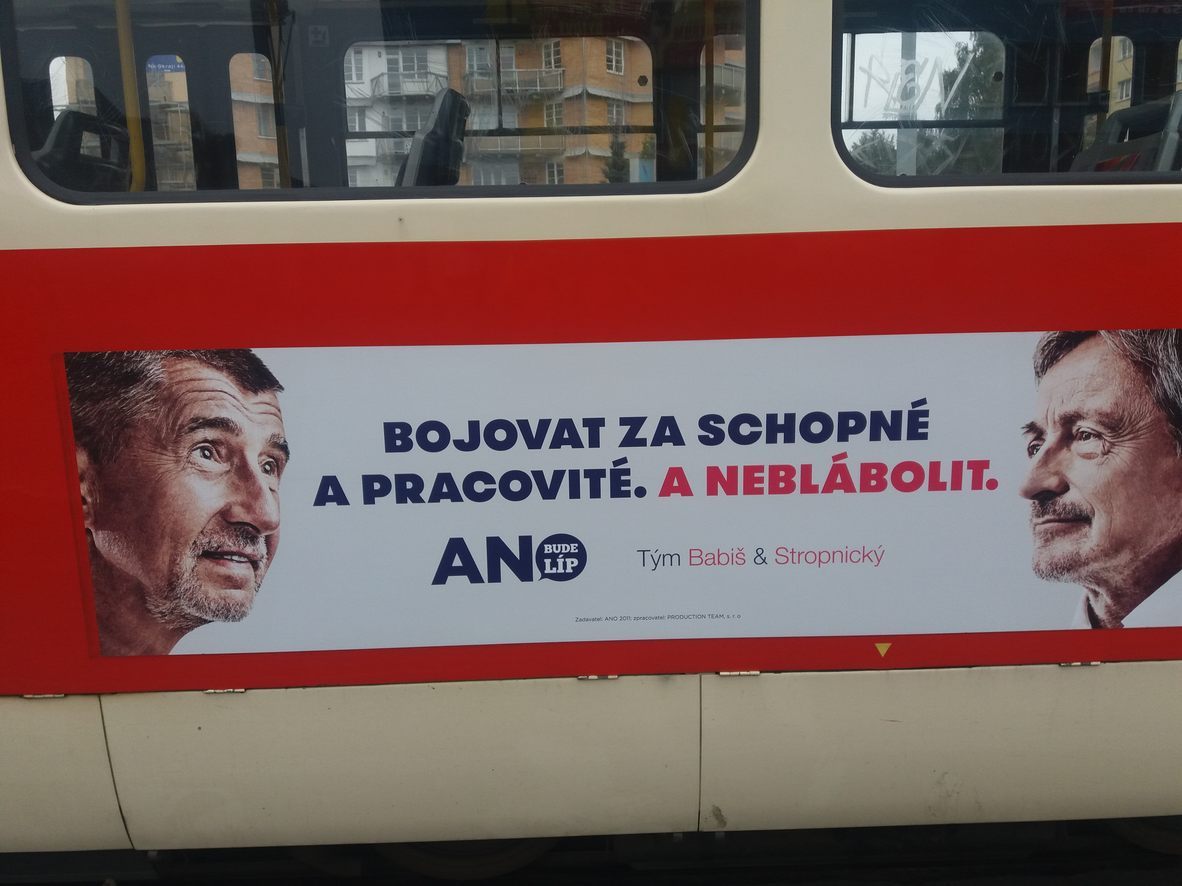 Today and tomorrow, Czechs will go to the polls in an election whose outcome, according to opinion polls, has been a foregone conclusion for almost the entire legislative term: Andrej Babiš’s ANO is projected to finish well ahead of its senior coalition partner, the Social Democrats (ČSSD), with the last pre-election polls even suggesting a widening gap with a wide-open race for second place between the ČSSD, the Communists (KSČM), and even the far-right Freedom and Direct Democracy (SPD). In stark contrast to this bit of apparent clarity is the sheer uncertainty in the composition of the next government: while the incumbent government of ANO, Social Democrats, and Christian Democrats (KDU-ČSL) is widely expected to retain its majority, almost all parties with a shot at entering parliament – including ČSSD and KDU-ČSL – have ruled out a coalition in which Babiš is prime minister.

All this against a background in which relations between the ruling parties have worsened dramatically over the past half-year: Prime Minister Bohuslav Sobotka (ČSSD) dismissed Babiš from his post as Minister of Finance in May (following question marks over ill-gotten gains from bonds issued by his company Agrofert) after an attempt to tender the entire cabinet’s resignation (in order to not let Babiš take up the role of victim) was rejected by President Miloš Zeman. The immediate run-up to the election has seen a breathtaking flood of scandals and mutual incriminations: Babiš is under a police investigation into fraudulent obtainment of subsidies in the Čapí hnizdo case (prompting the leaders of numerous parties to rule out a coalition with “a criminally charged prime minister”); the ČSSD Minister of Industry and Trade took the controversial step of unilaterally signing a memorandum on lithium extraction with an Australian company (with ANO accusing the ČSSD of conspiring to “steal lithium” and parliament convening for an extraordinary session just four days before the election); the Slovak Constitutional Court has reversed a previous court ruling absolving Babiš of collaboration with the Czechoslovak secret police (leading the ČSSD candidate for prime minister, Lubomír Zaorálek, to comment that “Babiš’s past has caught up to him”).

How, in the midst of all this, does Babiš manage to maintain a highly successful populist discourse – and what have the other parties been doing about it?

Populism, based on the work of Ernesto Laclau, can be understood as a discursive logic of articulating an antagonistic frontier between a power block and a popular subject; “the people” is a contingent articulation of demands united in their negative dimension of non-fulfillment by a locus of power. Populism as a hegemony project, then, is always a balancing act between extending the equivalential chain onto the largest number of demands and giving them a sense of positive coherence through privileged points of signification or nodal points (e.g. in the form of shared values such as “social justice”). In all this (as Laclau himself noted), populism very much resembles the logic of the political as such, with the difference that the subject being represented is claimed to be no less than “the people” – a constitutively impossible construction that no discourse can maintain indefinitely, meaning that politics as a struggle for hegemony never ends – with its opposite, or constitutive outside, being “the power” that rightfully belongs to it in a democracy and yet with which it can never be one (with the implication that populism, as noted by Canovan, is a “perennial possibility” built into any democracy).

Babiš’s ANO, in its electoral debut in 2013 (in which it won a stunning 18.7% of the vote), pitted in its discourse a hard-working people against corrupt, incompetent “politicians”; perhaps its most famous billboard featured the slogan: “We are not like politicians. We work.” After entering into government, however, ANO’s discourse has shifted away from a sweeping denunciation of “politicians” onto showcasing its record of competent (“hard-working”) management in government in demarcation from “the traditional parties.” In the current electoral campaign, Babiš has defended his record as Finance Minister – especially in reducing public debt by 70 million Kč – while promising large-scale public investments and wage and pension rises in the next government to the benefit of all (from doctors and teachers to those in the cultural sector). “Work,” in other words, functions as a nodal point with enough emptiness to accommodate a wide range of subject positions while bridging the party’s record in the previous government with its promises for the next: “to fight for what is capable and hard-working” – in contrast to the “blabber” of the other parties (as featured in the title photo of this article).

Contrary to crudely simplified accounts, Babiš is neither a Trump nor a Berlusconi nor an Orbán; his program does not call for an institutional (counter-)revolution or mass privatization of the state, nor is his construction of “the people” ethnically reductionist. His stance on immigration and asylum has been opportunistic: having welcomed refugees as an opportunity for the Czech labor market in September 2015, he has pursued a strategy of equivalential incorporation of anti-immigration demands (articulated above all by the protest mobilizations of the Block Against Islam and the electoral rise of Tomio Okamura’s SPD) since then, going so far as to claim earlier this year that “the ANO movement has been the leader of the anti-immigration agenda since the beginning.” Tellingly, Babiš has maintained a conspicuously two-faced line in relation to the SPD: while consistently ruling out a coalition with the SPD and denouncing its “unreal program,” he has affirmed that the two parties share the goal of “stopping immigration, the accountability of politicians, and direct democracy.”

Indeed, what is deeply problematic for Czech democracy consists in the openings that the ANO discourse has created for the SPD’s virulently anti-pluralist agenda, which has shadowed ANO like an evil twin in this election campaign: not content to merely sing the virtues of “work,” Okamura openly demonizes “parasites” who “are capable of work but do not work long-term” (and many of whose children, incidentally, “don’t know how to speak Czech”); beyond just “stopping immigration,” the SPD calls for an outright ban on Islam as a “totalitarian ideology” (and not a religion) and denounces the EU for opening the door to a “total Islamic invasion”; openly expressing support for the likes of Trump, Le Pen, Wilders, and Orbán, Okamura also propagates the right-wing “revolution” that Babiš has stopped short of calling.

Here, the pitfalls of a dominant populist discourse that seeks to maintain its populism from within government become evident. On the one hand, Babiš has predictably dismissed the criminal allegations in “the psuedo-case of Čapí hnizdo” and even alleged following the Slovak court decision that “the fingers of the mafia state are long” – an attempt to maintain an antagonistic frontier between “people” and (a hidden locus of) “power” even from a position of formal power. Yet while the ČSSD and other “traditional parties” have struggled to capitalize on Babiš’s alleged corruption – with ANO hitting right back on the lithium memorandum (“We won’t let the ČSSD steal lithium just like OKD,” referring to yet another scandal involving the ČSSD’s outgoing PM Sobotka) – the SPD has managed to present a radicalized discourse in which ANO is just another part of a corrupt, kleptocratic power block. Dubbing the lithium memorandum “the theft of the century,” SPD campaign materials have depicted Babiš and Sobotka as robbers of the nation’s mineral resources. It is perhaps no coincidence that it is, in particular, the SPD that has gained in opinion polls in the final weeks of the electoral campaign that have coincided with Babiš’s travails.

While the ČSSD has attempted to call Babiš out on his own alleged corruption while outdoing ANO’s spending promises, the parties of the right have largely pursued an anti-populist discourse that articulates the main line of conflict as one between “democrats” and “populists.” This is particularly pronounced in the case of the Civic Democratic Party (ODS), which has painted the specter of an ANO-KSČM-SPD alliance after the election: “So that populists with communists won’t subjugate us – therefore I’m voting ODS” – thus replacing the familiar menace of a ČSSD-KSČM coalition as the go-to bogeyman of the right. In both cases, the logic has been one of alleging an unholy alliance that is nonetheless formally ruled out by the main competitor: just as the ČSSD has ruled out a coalition with the KSČM and “other extremist parties” since the Bohumín resolution of 1995, Babiš has repeatedly ruled out both the KSČM and the SPD as coalition partners.

Indeed, the shift from a left/right toward a populism/anti-populism conflict as articulated in the discourses of political parties can be seen in TOP 09 chairman Miroslav Kalousek’s resolute opposition to ANO-KSČM-SPD coupled with a willingness to form a coalition “with all other democratic parties” after the election, explicitly including the ČSSD – a previously unthinkable proposition. In particular, the animosity between Babiš and Kalousek, Babiš’s predecessor as Finance Minister (2010-13) whom the ANO chairman has singled out as a “symbol of corruption,” can be seen as a symbol of the new conflict in Czech politics.

The Czech Pirate Party, which is expected to finish above the 5% threshold for entering parliament, represents an interesting case featuring elements of a counter-populism opposed to both ANO and the targets of ANO’s populism. In a sense, the party – being the latest extra-parliamentary newcomer – has taken up ANO’s original mantle of opposition to all the “politicians” that have come before them, with chairman Ivan Bartoš attributing widespread mistrust in politics to the fact that “these politicians [such as Miroslav Kalousek and outgoing Minister of the Interior Milan Chovanec] haven’t even stepped down for twenty years.” Accordingly, the party has ruled out coalitions not only with “undemocratic parties, which are for us KSČM and SPD,” but also with “people who have a corrupt past” including Babiš – with discussions being a possibility only with an “ANO that Babiš, Jaroslav Faltýnek and all employees of Agrofert will leave.”

Whatever the exact outcome of the election, it is looking very much likely that something will have to give: a mathematical majority of ANO, KSČM, and SPD will mean that not even the widest possible anti-populist coalition would be able to govern, while Babiš may well have to either renounce his claim on the premiership or retract his pledge to not work with the KSČM and the SPD. In other words: in a discursive field that remains as fluid as ever, one can expect further displacements in the antagonistic frontiers in the coming weeks.