In this analyses of the Czech election results our research fellow Seongcheol Kim argues that the results of the recent Czech parliamentary elections mirror the populism / anti-populism conflict in the Czech party system, while the dramatic decline of previosuly established parties signals a seismic shift in the party system and its central cleavages. 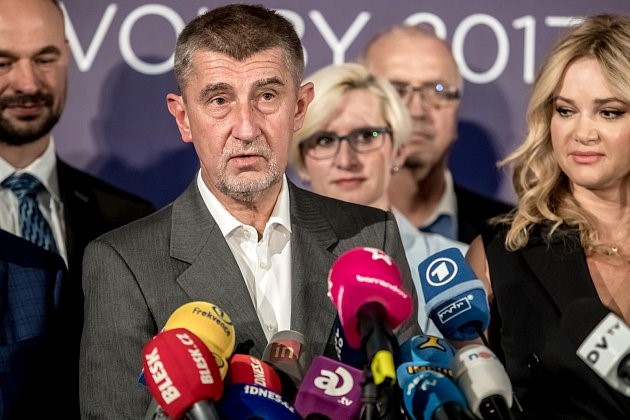 Andrej Babiš at the ANO press conference on election night (photo by Divíšek Martin for deník.cz).

1. The election results, much like the campaign, are indicative of a populism/anti-populism conflict in the party system.

Contrary to pre-election polls, it was the ODS – which ran a scare campaign centered on “populists and communists” running the next government – that finished second, followed by the Pirates with their counter-populism, which especially mobilized urban liberal voters who had voted in large numbers for the (now strongly anti-populist) TOP 09 in the previous two parliamentary elections, followed in turn by the far-right populist SPD.

Indeed, the first round of post-election consultations has produced a deadlock in accordance with this logic of conflict: Despite Babiš announcing that he would prefer a majority coalition with the ODS, the latter has resolutely blocked ANO’s advances, with party chairman Fiala announcing after the bilateral meeting that “We are doing what we promised to the voters, what we have a mandate for. We do not have a mandate to rule with ANO.”

This leaves the SPD as the lone party that has signaled any kind of interest in ruling with ANO. Apart from the fact that the two parties do not have enough seats for a simple majority, however, one key sticking point is that Okumura, like all other party leaders, has ruled out a government with a prime minister facing criminal charges. In the SPD case, this matters all the more because the party’s competing populist discourse does not shy away from interpellating Babiš as part of a kleptocratic elite (e.g. on lithium) and can ill afford associations with even alleged corruption.

2. The key question for the integrity of the democratic system will be to what extent ANO continues to produce openings for the SPD from within government.

As I have argued previously, the SPD’s virulently anti-pluralist discourse is built on a radicalization of ANO’s nodal point “work” as well as the extension of the demand of “stopping immigration” onto a sweeping anti-Islam, anti-EU agenda. Babiš’s strategy vis-à-vis his far-right populist competitor has been two-faced, ruling out a coalition with the SPD while expressing common ground on “stopping immigration, the accountability of politicians, and direct democracy.”

1) to what extent the SPD succeeds in pushing through its agenda on this basis, stretching the limits of how far ANO is willing to go with each step;

2) to what extent ANO opts for a strategy of differential incorporation of SPD demands, possibly even with the latter in opposition.

The SPD has named three policy priorities as conditions for a governing arrangement: a law enabling referenda at a national level (a largely uncontroversial step supported by a wide spectrum of parties), an end to all “illegal immigration,” and the banning of sharia law in the Czech Republic (a modified version of the party’s wildly unrealistic flagship demand of banning Islam as such). All three policies are packaged in a way that Babiš can hardly afford to reject them; yet Okamura is clearly pushing ANO’s boundaries as far as possible, such as by coupling the referendum law with an in/out referendum on EU membership (which has been noted as a sticking point in the second round of ANO-SPD negotiations beginning yesterday).

A few days after the election, Okamura made a controversial statement criticizing financial transparency at the Czech public broadcasting company and suggesting that the latter could be brought under direct state management. Representatives from a wide spectrum of parties criticized Okamura’s comments, including the incumbent ANO Minister of Justice. If this is any kind of indication to go by, it may be one that a hypothetical ANO-SPD governing arrangement would lack not only the numbers but also a deeply shared agenda for pushing through a Polish or Hungarian-style institutional coup.

3. The dramatic decline of the ČSSD and of the KSČM is indicative of a wider shift in the conflict structure of the party system but also points to the limitations of an electoral strategy of taking up right-wing populist demands.

It was often said of the Czech Republic that a socio-economic conflict dimension (perhaps more so than in any other country in the region) dominated the party system, with the center-left ČSSD pitted against the market liberalism of (mostly) the ODS and the KSČM picking up enough disaffected ČSSD voters to remain a relevant oppositional force (albeit with no coalition potential). Indeed, it was the ČSSD, during its transition into a big-tent party of the center-left in the mid-1990s, that took the bulk of the votes away from the far-right Republicans, who were last represented in parliament in 1998.

While ANO, in its electoral debut in 2013, drew over half of its votes from the three-center right parties in government at the time, its gains in the 2016 regional elections and in the 2017 parliamentary elections have eaten into the ČSSD and KSČM electorates as its populism has expanded and adapted accordingly. This can be traced back to a shift in ANO’s discourse – if Babiš gained notoriety in the 2013 election for his promise to “run the state like a firm,” he went out of his way to correct himself in his recent book What I Dream About, which was used as campaign material in the 2017 election, that he wants to run the state like a family that cares for its most disadvantaged – as well as Babiš’s success in maintaining the antagonistic division between a “hard-working” ANO and the corrupt “traditional parties,” with the ČSSD, and not the parties of the right, now being the main target as the principal party of government.

In the short term, however, the fact that both the ČSSD and the KSČM did considerably worse than pre-election polls suggested also points to largely ineffective campaigning that sought to co-opt a number of right-wing populist talking points. The ČSSD attempted to construct the “security” issue as a question of social protection and protection from external migration; it even tried to outflank Babiš from the right on immigration, running a placard in the final week accusing Babiš of “want[ing] to bring into Czechia 200.000 cheap laborers from the east. This will lower wages and constitutes a security risk.” The KSČM, already well known for its hardline anti-refugees stance, was also the only party apart from the SPD that promised an in-out referendum on EU membership. It can be surmised that many a ČSSD or KSČM voter sold on these policies opted for the original in the form of the SPD – especially as the latter may have been seen to offer a clearer path to power given its aforementioned points of overlap with the expected winner ANO.